The shares of iPhone maker, Apple (NASDAQ:AAPL) are among the hardest hit in the Dow Jones Industrial Average amid the devastating coronavirus outbreak. They are down about 17% from their peak during the last week — the worst for equities since the 2008 financial crisis.

The coronavirus, which has killed more than 2,800 people and infected more than 85,000 people globally, has bludgeoned U.S. tech firms with a strong presence in Asia in particular. Apple, which relies on China for about 20% of its revenue and extensively relies on the Asian nation to manufacture its phones, is especially vulnerable. 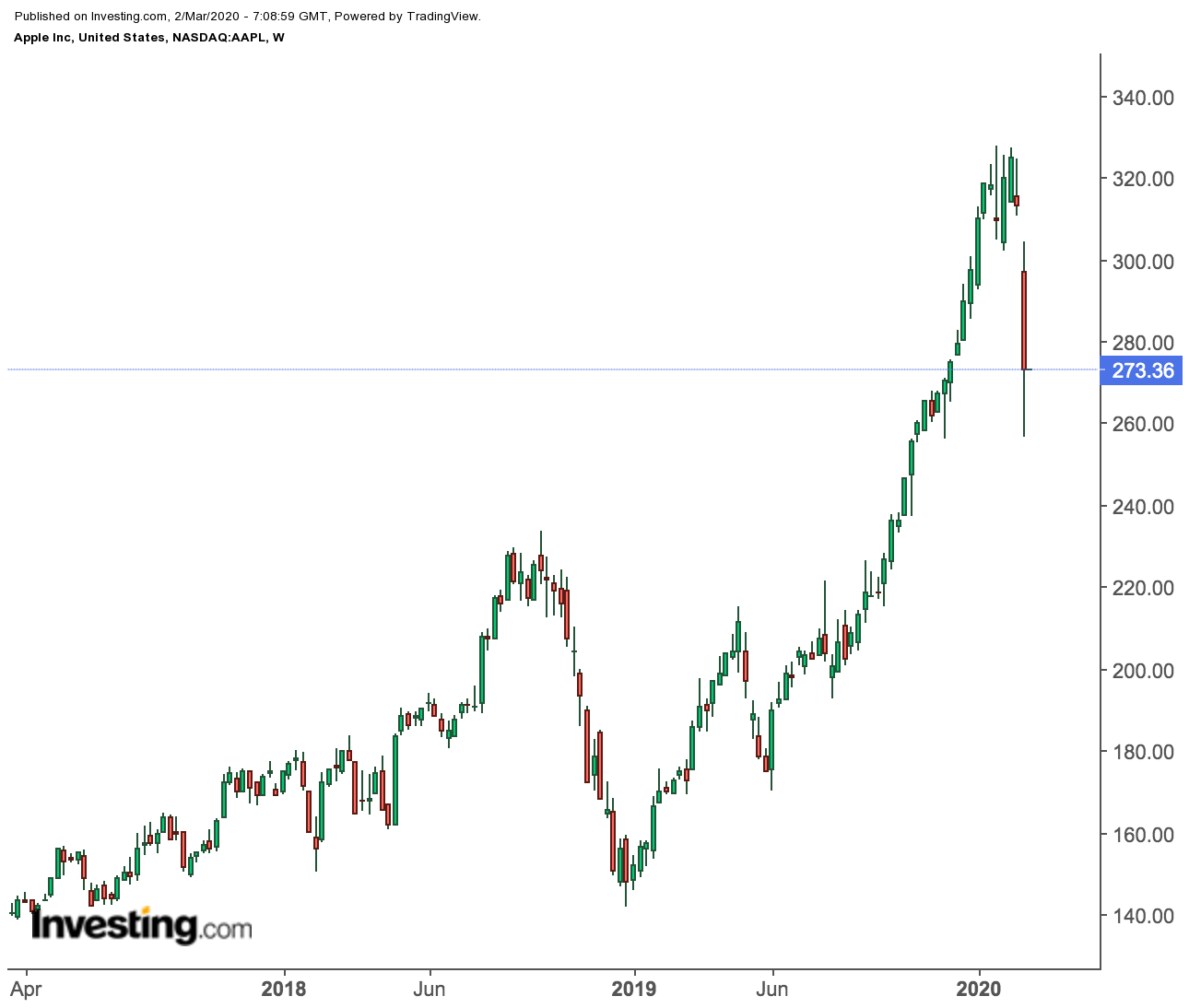 After a drop of this magnitude, the temptation for a “buy on the dip” trade is too hard for some investors to resist, especially when this strategy has paid off repeatedly during the past decade. And Apple, which was on a strong growth path before the virus spread, is at the top of the list for investors looking out for the bottom.

Before warning investors on Feb. 17 that it doesn’t expect to meet its revenue guidance for the March quarter due to supply disruptions in China, the Cupertino, CA-based Apple was firing on all cylinders.

Wall Street was positive on its growth in China, while the company was preparing to launch a new low-cost iPhone model and a 5G-enabled device later this year. Apple’s latest earnings report in January had shown that the sale of iPhone units was robust, defying many analysts’ expectations that the “super growth” cycle for the product was over.

While the majority of these growth catalysts are still intact in the long-run, we do see the risks growing for the company’s core iPhone business now that many major economies are facing a drastic coronavirus-induced slowdown. Activity in China’s manufacturing sector contracted sharply in February, with the official gauge hitting the lowest level on record.

There is no doubt that the prospects for the world’s second-largest economy are ugly. It will also be hard for the U.S. to emerge unhurt from this global health crisis. Earnings growth for U.S. companies will be stagnant in 2020 as a result of the coronavirus, according to Goldman Sachs which revised its earnings estimate for the year to $165 per share from $174 per share, representing 0% growth in 2020.

With the environment growing negative, Apple stock is likely to be hit by analysts’ revisions to price targets which have been quite bullish so far. That means we could see another spell of weakness for Apple even if we assume that the current pullback has run its course. For those investors sitting on the sidelines waiting to buy top quality stocks, it doesn’t seem to be the right time to make the move.

“While ‘buy the dip’ has been a successful strategy since the Global Financial Crisis, with equity drawdowns often reversing quickly, it might be more risky this time,” Christian Mueller-Glissmann, equity strategist at Goldman Sachs, said in a note to clients. “With global growth still weak, the shock from the coronavirus outbreak lingering and less scope for monetary and fiscal easing, the risk of a more prolonged drawdown remains.”

The economic disruption caused by the coronavirus leaves Apple one of the most highly exposed mega caps doing business in Asia right now. Any prolonged weakness should be a buying opportunity, but that stage in the current down cycle hasn’t been reached yet, especially as coronavirus cases are increasing rapidly across the world.

UK Startup Puts Haitian Farmers and Their Crops On the Blockchain