U.S. futures fall for a sixth day
European stocks slide but rebound from the bottom of a rising channel, suggesting a buying opportunity
Dollar take-profit leaves room for the yen and gold to advance

The shellacking of U.S. futures, along with most regional equity markets, resumed this morning after U.S. indices were mostly lower on Wednesday. Contracts for the S&P 500, Dow Jones and NASDAQ, as well as the MSCI All-Country World Equity Index, a benchmark for global shares, are each on course for a sixth day of declines and potentially the lowest close since October, as the worldwide panic regarding the ongoing spread of the coronavirus and its impact on the global economy continues unabated. 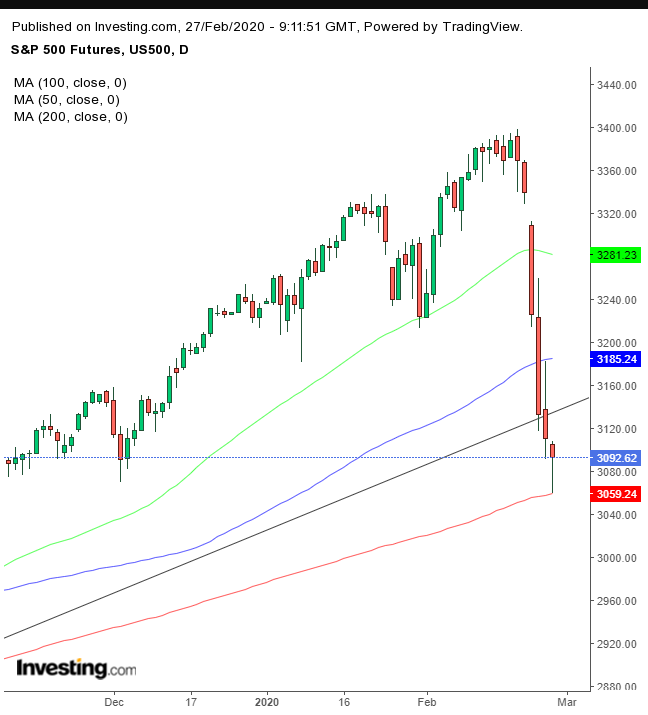 While the slide deepened the penetration after crossing below the contract’s uptrend line since the December 2018 bottom, prices jumped back from the 200DMA, developing a bullish hammer, at least on an intraday basis.

The STOXX Europe 600 Index opened sharply lower on Thursday, retesting the bottom of Wedneday’s hammer, which closed above both the 200 DMA and a support-resistance line since April. 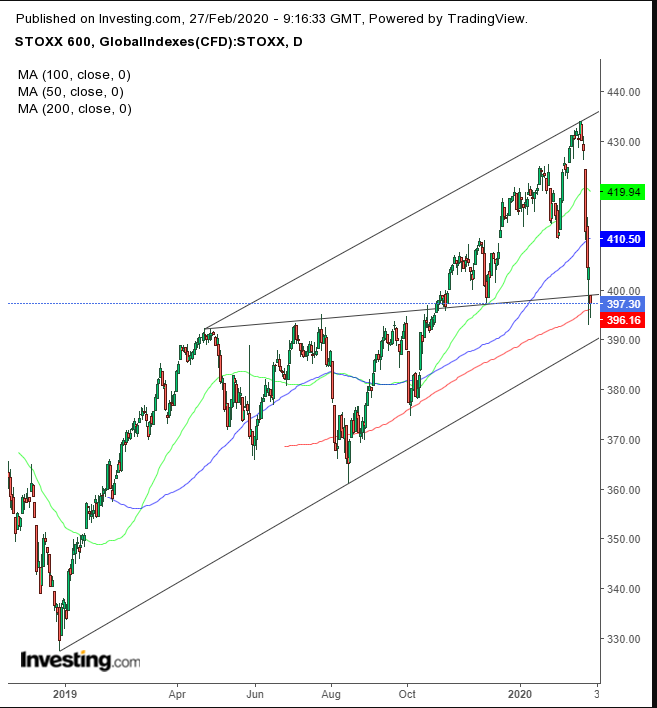 Today’s trading pattern has also been forming the same pattern, retesting the 200 DMA. However, as of time of writing it’s still below the support-resistance line since April, just beneath the 400.00 psychological level. Note, the 200 DMA protects the bottom of a rising channel since the December 2018 bottom. From a technical standpoint, that means this is an opportune time to invest in European stocks. 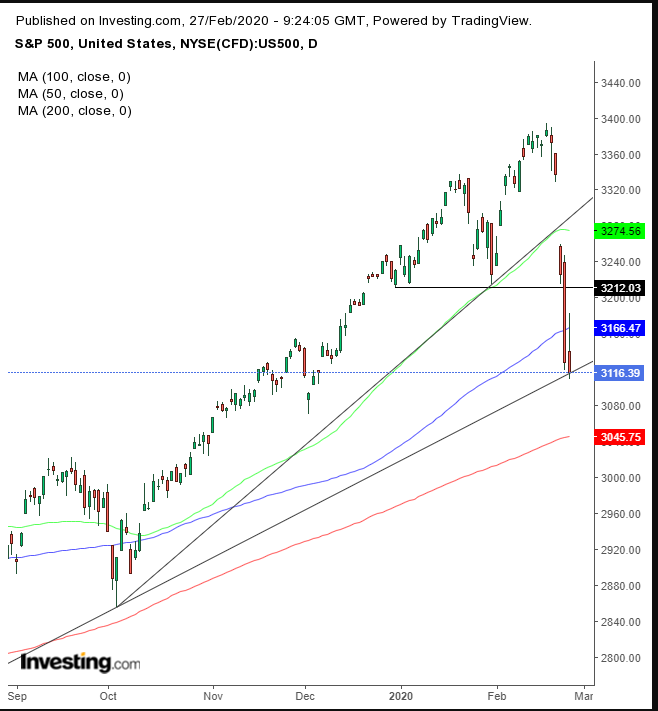 The S&P 500 closed just 0.4% lower, finding support by an uptrend line since the December 2018 Christmas Eve rout, after plummeting over 3% during each of the two preceding sessions. Earlier this week, we suggested the index might be experiencing the beginning of a top. We posited that there could be one more rally before the plunge. However, the market was too weak to even attempt another bid. 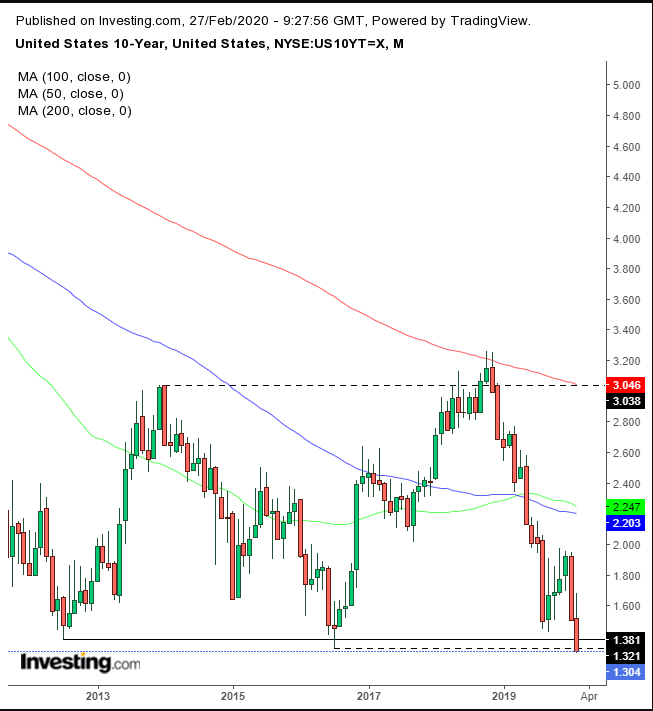 Yields, including for the U.S. 10-year Treasury, have sunk to yet another record low, below a range in place since late 2012, suggesting there’s room for additional declines.

The U.S. dollar dropped for a second day, correcting the 2.5% advance made in the first 20 days of February. 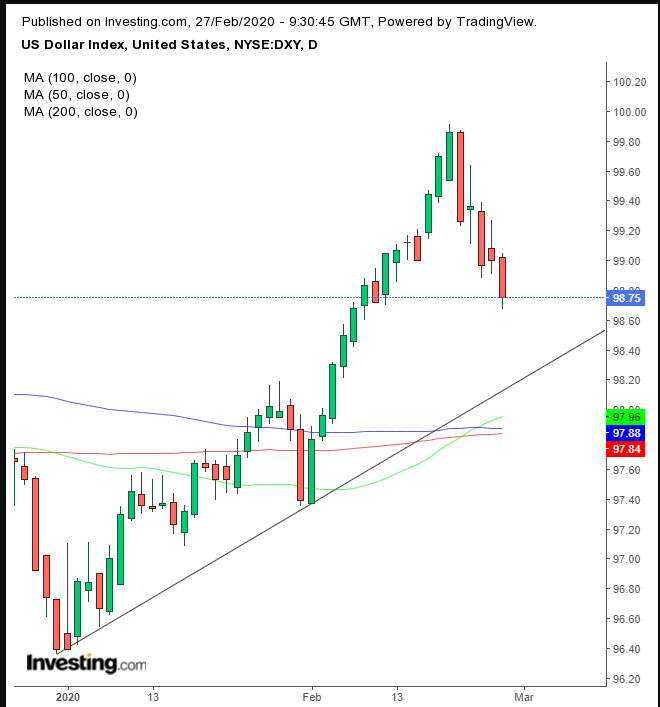 However, the global reserve currency is still well above its uptrend line and the 50 DMA crossed above the 200 DMA, triggering a golden cross. This means there’s room for the yen and gold to strengthen, as has been the case today.

Bitcoin recovered from a fourth day slump, afer falling out of what could have been a bullish pattern, if the price had broken to its top side. 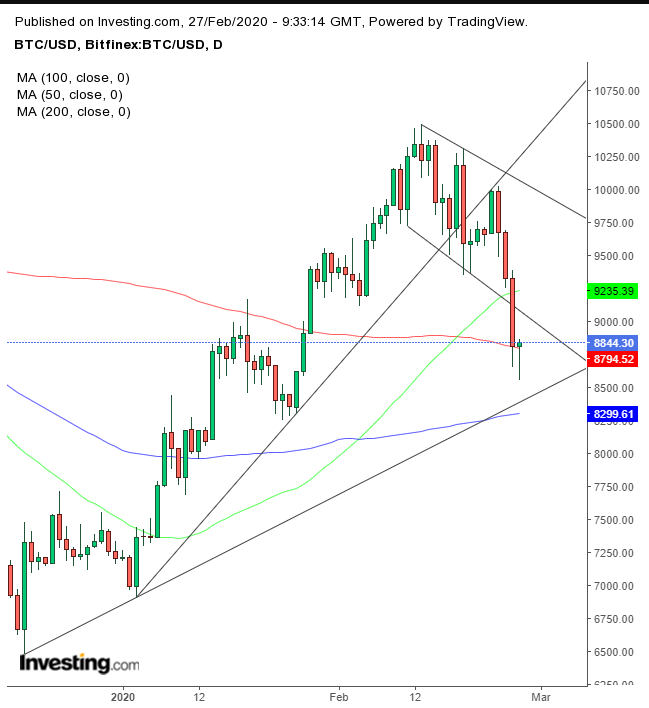 Now, the price is forming a bullish hammer, rising above its uptrend line since the Dec. 18 bottom, crossing back above the 200 DMA, suggesting a further rebound ahead. 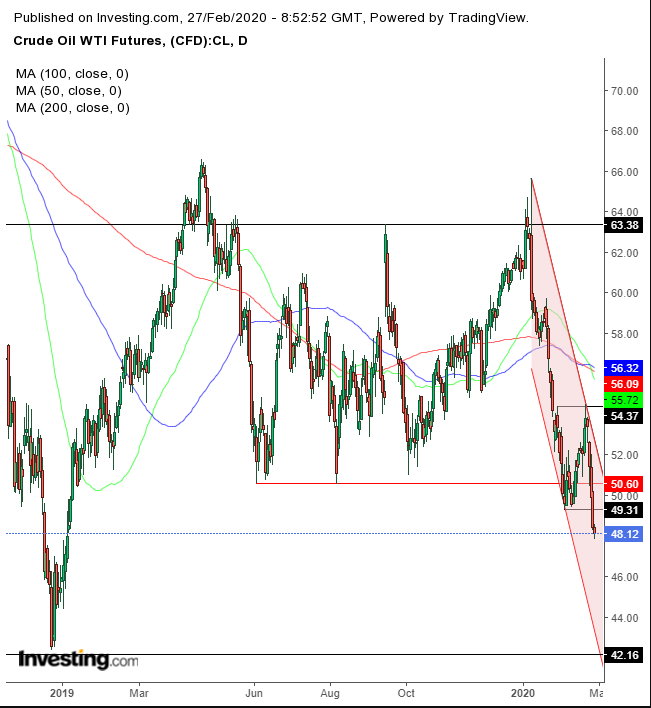 Oil opened lower, extending the plunge below the $50 psychological round number, suggesting more trouble for bulls. Uncertainties about the impact of the virus on national economies continue to rattle oil markets.