Contracts on all four popular U.S. indices edged higher following the worst two-day rout for the SPX since 2015, but at the time of writing they seem to be losing momentum.

Russell futures already gave up the advance and extended the decline, while contracts on the remaining indexes have been losing their grip, falling from their highs.

Today’s trading pattern seems to be replicating yesterday’s: an initial rebound that fizzles out and extends declines.

In South Korea, the number of coronavirus cases has now risen past 1,000 and in the U.S., officials warned the country is not prepared for the epidemic — and it’s likely to be serious.

With a geopolitical crisis such as this, there is no smart money and dumb money, because everyone’s in the dark. 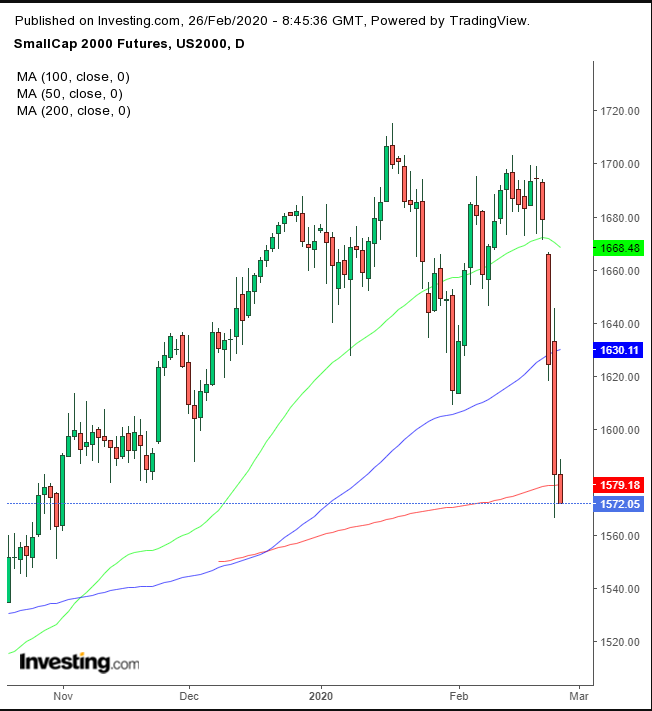 Are contracts on the small-cap index signaling the rest will follow? Meanwhile, Russell futures fell below the 200 DMA. 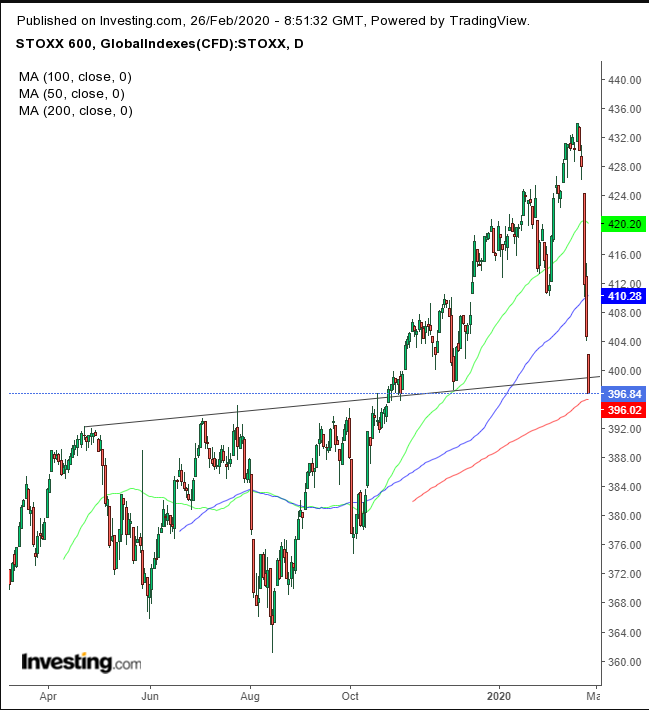 The STOXX Europe 600 opened significantly lower with a selloff in travel and leisure equities. The pan-European index fell for the fifth straight session, crossing below a support-resistance line since April 2019 and is now testing the 200 DMA.

Australia’s S&P/ASX 200 (-2.31%) underperformed, followed by South Korea’s KOSPI (-1.28%). South Korea’s won fell toward its weakest since 2016 after the country reported a further escalation in coronavirus cases. 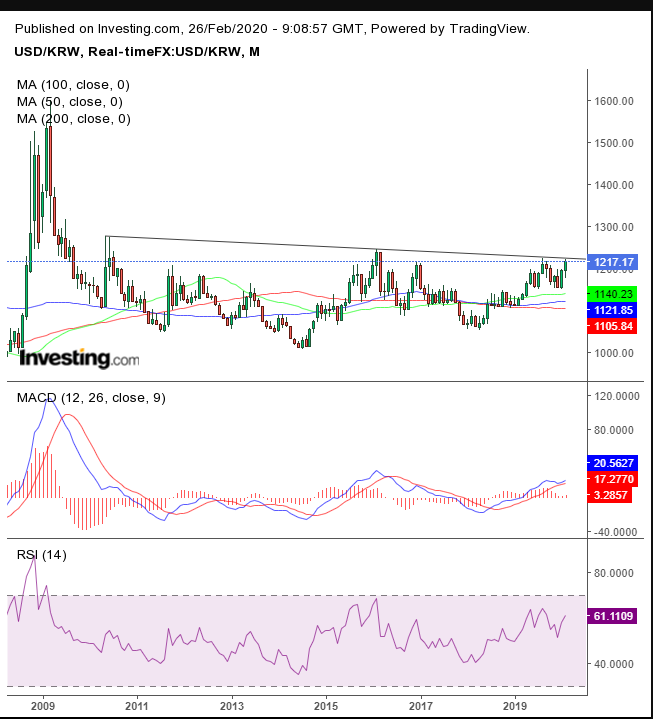 The USD/KRW is struggling against the 1,200 levels, whose break would complete a massive bottom going back to 2010. 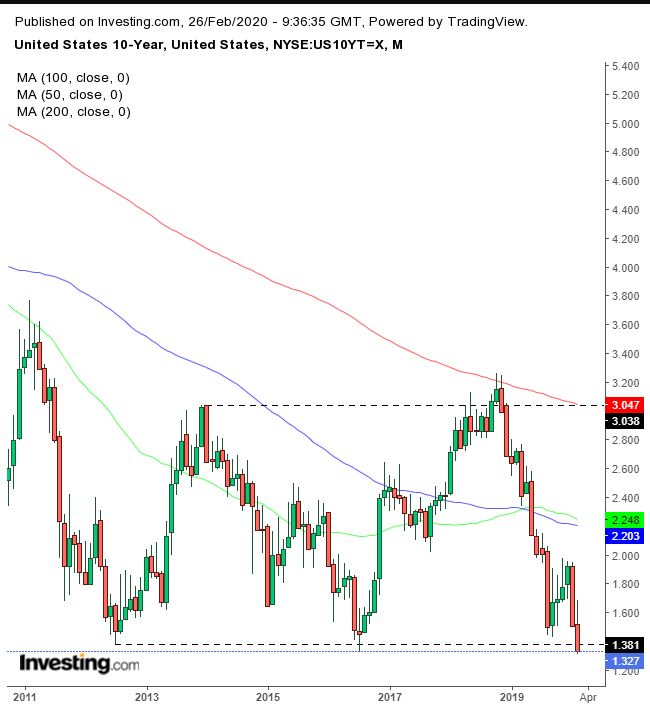 10-year yields joined their 30-year counterparts in record lows. A further decline would set up yields to fall much lower, putting in place a chain reaction after a downside breakout to a range last met in 2012. 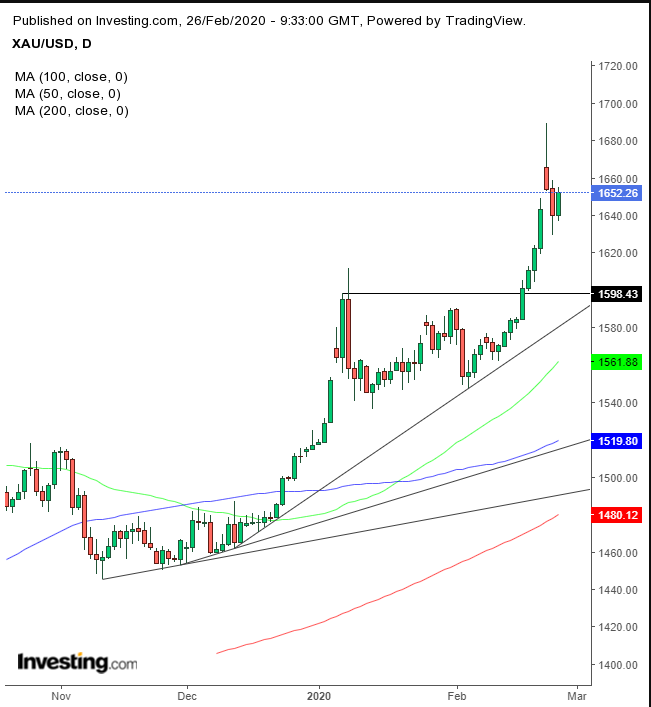 Gold pared almost all of yesterday’s selloff. The reason that gold dropped during an extreme risk-off day is that yields competed over haven money, with foreign demand boosting the dollar and weighing on gold. 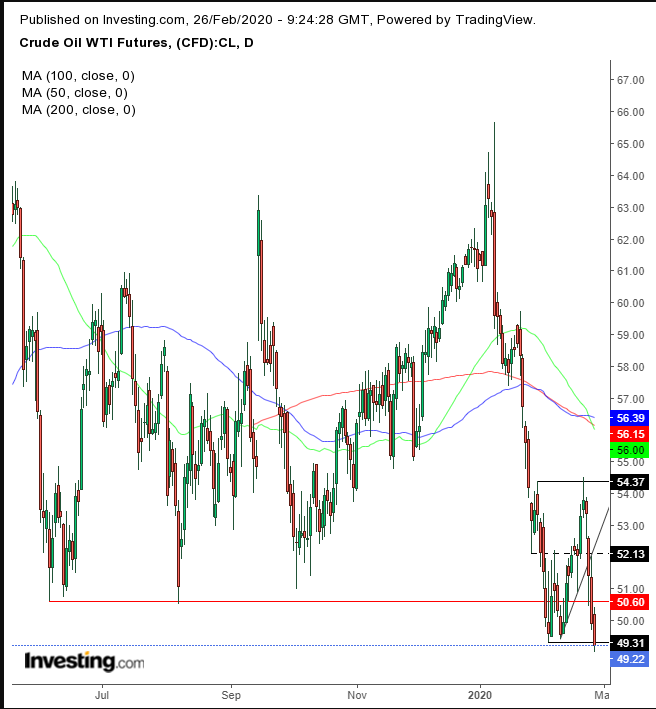 Risk-off pushed oil lower, deepening the penetration below the psychological $50 a barrel, which looks to complete a continuation pattern. This would imply a further $5 drop.

The 50 DMA crossed below the 200 DMA, triggering the ominous Death Cross, though the sideways move since mid-last year diminishes the predictive value of moving averages. The real warning is the fall below the $50 level support.

Earnings keep rolling in from companies including: Baidu (NASDAQ:BIDU), Best Buy (NYSE:BBY), Occidental Petroleum (NYSE:OXY) and Dell Technologies (NYSE:DELL) on Thursday; and London Stock Exchange Group (LON:LSE) on Friday.
The Bank of Korea announces its policy decision on Thursday, with rising risks of an interest rate cut.
U.S. jobless claims, GDP and durable goods data are out Thursday.
Japan industrial production, jobs, and retail sales figures are due on Friday.

Enter Your Information Below To Receive Latest News And Articles
Your information is secure and your privacy is protected. By opting in you agree to receive emails from us. Remember that you can opt-out any time, we hate spam too!
Latest Posts